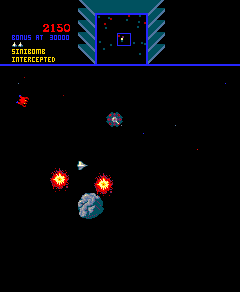 Sinistar is an arcade game released by Williams in 1982. It belongs to a class of video games called twitch games. Sinistar was developed by Sam Dicker, Jack Haeger, Noah Falstein, RJ Mical and Richard Witt. The title is also a pun on the word "sinister." The player pilots a lone spacecraft, and must create "Sinibombs" by shooting at drifting planetoids and catching the crystals that are thereby released. Sinibombs are needed to defeat the game boss, Sinistar, an animated spacecraft with a demonic skull face. Sinistar does not exist at the start of the game, and is continuously under construction by enemy worker ships. Though time is crucial, attempting to mine too quickly will destroy a planetoid without releasing any crystals. Enemy worker ships are also gathering crystals (often stealing them from the player) which they use to construct the Sinistar. Enemy warrior ships can directly attack the player's ship. The player is given a head-start before the enemy ships have enough crystals to begin construction. Game ends when the player's ships are all destroyed. Once the Sinistar is completely formed, a digitized voice (recorded by radio personality John Doremus and played through an HC-55516 CVSD decoder) makes various threatening pronouncements, including "Beware, I live!," "I hunger, coward!," "I am Sinistar!," "Run! Run! Run!," "Beware, coward!", "I hunger!," "Run, coward!," and various loud roaring sounds. The Sinistar has no weapon attacks, but if it contacts the player's ship while it darts about the playfield, the player's ship will be "eaten" and destroyed. A total of 13 Sinibombs are required to destroy a fully built Sinistar, although an incomplete Sinistar can be damaged to slow construction. Each short-range Sinibomb automatically targets the Sinistar when fired, but can be intercepted by a collision with an enemy ship, enemy fire, or a planetoid. The player moves from one zone to the next each time he defeats the Sinistar. A sequence of four zones repeats continuously after the first zone. Each is named for the most numerous feature of that zone: Worker Zone, Warrior Zone, Planetoid Zone, and Void Zone (the Void Zone is especially difficult because it has very few planetoids). Beginning with the first Worker Zone, a completed but damaged Sinistar can be repaired/rebuilt by the enemy ships by gathering more crystals, extending its "lifespan" if the player is unable to kill it quickly.

Originating in the arcades, Sinistar is a multi-directional shooter. In the game, you must fly your ship about, shooting the floating asteroids to release Sinisite crystals. These crystals must be gathered to create Sinibombs. Also gathering crystals are worker drones. They are gathering crystals to build Sinistar, who wants to destroy the universe. As the workers will sometimes steal your mined crystals, feel free to blast them. Also flying about are warrior ships who want to blast you to protect the workers and Sinistar.

Once Sinistar is completed, he will announce "Beware! I live!" and begin chasing you. Hopefully, you have made enough Sinibombs to destroy him. As he chases you, press the fire button to release Sinibombs to damage him. Once he is completely destroyed, you are off to the next, harder, level.

I will always love it for the voice of Sinistar, taunting and growling at me from across the arcade - it's a part of the background radiation of my childhood - but I will always hate it for how quickly and frequently Sinistar killed me.
Reviewer: Galacticus - favoritefavoritefavoritefavorite - March 15, 2015
Subject: Controls
Ctrl - Fire
Alt - Sinibomb
Arrows - Direction
After game loads hit advance
Add coins
Hit 1 to start
Reviewer: GoodNewsJimDotCom - favorite - November 14, 2014
Subject: Asteroids with a boss
This game would have been much better if the boss wasn't so tough. I'm down with a boss that taunts me, but this boss would wreck your face. Don't believe me, go play it. In my book, it was the original quarter eater that I played, and over time, more and more frequency of quarter eaters came out. I played this on mame when I was an adult and the game isn't so bad if you're willing to shell in credits, but in the arcade I always steered clear of it.